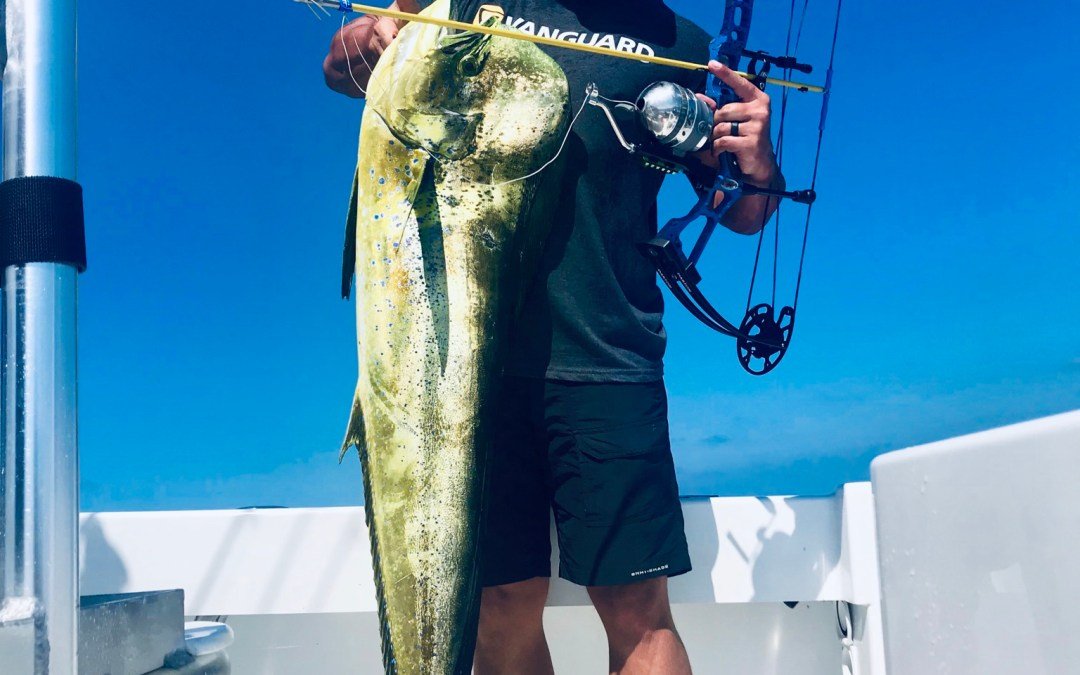 6am, The sun was just starting to illuminate the waves as we headed south. I had the boat cruising slow in case something was floating so as soon as I could see the wave tops I pushed the throttles down and picked up speed. A few minutes later the crew of Finz Dive Centers 34ft Freeman has spotted birds on the horizon. I turned and yelled to get the baits ready. As we slowed down the guys dropped the trolling lures into the water and we were fishing. This was no ordinary fishing trip though. I had a notion with the mahi bight being so good we could shoot some with the Bows from the boat.

The first fish was on and it was a short fight to the boat. As the small “schoolie” mahi came close I tossed some small bait into the water. 15 fish appeared and started eating right at the surface. The guys knew it was time and grabbed the bows.

Wait for the right moment I said, as the arrows started flying. Too Low! Try again! Aim to the left more! Reload! We were scrambling to make the shots connect with the fish.

All at once we screamed! You got one on Billy! The excitement was contagious. Everyone stopped firing to watch him fight this mahi he just shot with a bow. Once it was close the gaff finished the job and we had achieved our goal. Shoot a mahi mahi from the boat with a bow. The pictures started and the high fives went around as if we forgot there were still a bunch of fish swimming around the boat.

Drop that fish in the box and take another shot! I shouted.

Bow fishing has been a popular sport in the shallow waters around Florida and Louisiana for a few years. It combines the thrill of hunting with the fishing world to catch diner and have a blast doing it. On our trip we used special compound bows with fishing reels attached to the arrow. When we shoot the arrow flys and stays attached. You then fight the fish directly on the bow and hope your aim was good enough to stick.

At the end of the day Finz ended up with a box full of mahi and a new way to enjoy catching fish and being on the water.

We Can't Wait To Hear From You!

Fill out the form and we will get back to you within 24-48 hours.