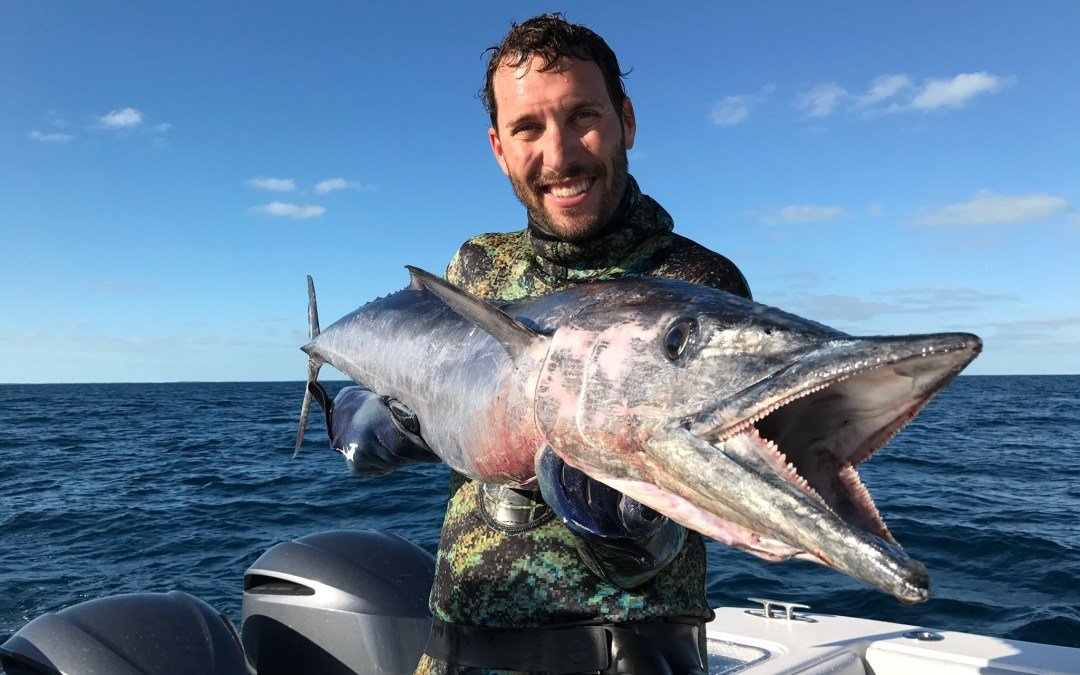 Looking back on 2017’s freediving season, we were very impressed at Key West’s Wahoo run during the Winter. We went diving over 20 times in two months, and our biggest Wahoo was approximately 60lbs. Wahoo are famous for their speed, and their quality of flesh making it a prize game fish. They are part of the Scombridae Family, which includes mackerels, tunas, and bonitos. Part of our success at catching these fish are due to our knowledge of spearfishing, our newest CMOR mapping systems, and having grown up fishing in the Florida Keys.

There are two methods of landing a Wahoo, either fishing or spearfishing. At Finz, we are known for spearfishing. We stock a full line of spear guns, float lines, buoys, shafts, and slip tips at our Dive Center, which provides us with the best results as far as accuracy, tight tolerances, and precise fit. Location and timing is also key when targeting wahoo. Around the full moon we will find schools of 20-100+ fish, in specific locations. Being from the Keys, we have thousands of great dive spots, but only a few will carry Wahoo. Another large component of finding the best location, is having not only the newest, but best technology. We currently have been using CMOR Mapping chips, which have helped us find new spots daily. These maps provide us with the highest resolution imagery with unprecedented detail. It’s amazing how technology has abled us to find forgotten wrecks, remote reefs, and unseen ledges.

An exciting part of growing up in the Florida Keys was seeing who was catching Wahoo, how big these fish were, and the excitement of waiting on the boats to arrive back to the docks. Once spearfishing became a huge sport in Key West, Wahoo became a more sought-after catch. Their speed underwater, the blue water depths they dart through the ocean at, and their sheer size and strength are just a few of the fascinating things that makes spearing one of these fish such an accomplishment. Not to mention, the colors they emit are unlike any other you’ll ever witness. Catching a wahoo on rod and reel is exciting, landing your first one with a speargun… that’s something you’ll remember your whole life.

There is something mysterious about Wahoo, they’re not only impressive by appearance, but also by their speed. Known for being one of the meanest, biggest, and fastest fish in American waters, they’re able to reach speeds of 60 mph. Once you catch your first Wahoo, you can bring it home to your friends and family for one of the most delicious fresh meals. Below are three ways to cook Wahoo by Brooke Thomas.

We Can't Wait To Hear From You!

Fill out the form and we will get back to you within 24-48 hours.